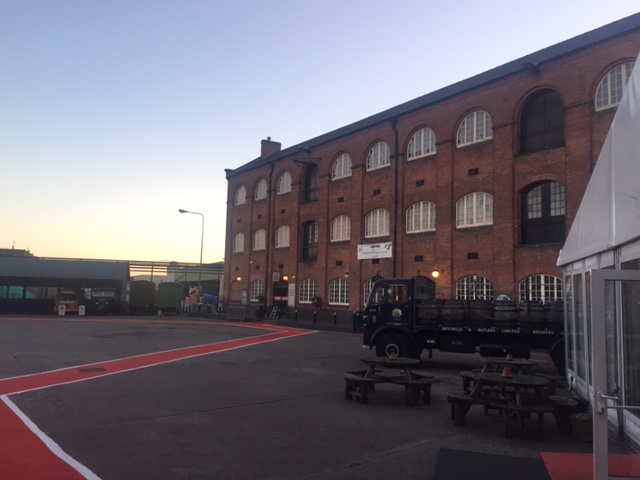 Last night I spoke as part of the ‘live podcasting’ happening at the first Circularity Festival in Burton in Trent. A meeting of ‘ideas and music’ the night came from the growing grassroots movement and featured music from Star From Ivy, Andy Crowe and Emma Buckley, as well as ‘in conversation’ pieces between sets.

The night was themed around mental health (Circularity covers a wide range of modern issues and thinking so do check it out) with profits from the night given to charity MIND. I was asked to not only speak about The Winter Passing, but also about the creative process of writing and the link it has to mental health (speaking from my own experience). I did that – and spoke about something unplanned too!

Chris Baldwin and Rob Gillespie handled the interview side and we spoke about the novel and as some of that will become available as a podcast I won’t go word for word on what we covered but rather touch on it through the themes of the book. Before I do shout out the museum where it was held: my mum was curator of the National Brewery Centre when I was growing up and the place is brimming with memories of her – it was an emotional return for me but if you’re interested in the inspirational woman my mum was I wrote about her a few years ago here.

And if you’ve been wondering what The Winter Passing is about – not so much the plot or storyline but the themes – this one is for you. If you’re all ready to buy the book and start reading you can do so here (paperback coming soon – promise).

The novel is wrapped around memories – both the fact Centaury finds hers have been locked away but also in how it’s told. It moves between current action and her memories surfacing in order to move the story forward and reveal different perspectives, and looks at how even the smallest words and actions can have big consequences.

I’m fascinated by the idea that we are our memories. We’ve driven forward by our experiences and the evidence we gather on how best to live, what decision to take, but that our memory and our perception of what is happening is filtered and edited imperfectly as we process it. The novel, really, is about whether we really exist without our memories and whether we realise our perception of an event is only one version, never a definitive.

I’m also quite into the idea that a lot of magic is stuff we haven’t yet explored or understood through science – they are two sides of the same coin. And I guess that’s where the other thing I spoke about came in: synaesthesia.

In talking about being a music journalist and my path with writing I mentioned I saw the colour of sound – and the audience were really taken with this condition and my experience of it. I’ve never spoken openly about it before, and I don’t know what it’s like to not have it, so suspect I was a bit rabbit in the headlights but there is a good article here if people are interested generally.

In the book this idea of ‘everyday magic’ – things like synaesthesia, the natural world, the seasons, even incredible but intangible things like love – are given more time that we generally do in the world right now.

There was a good question from Rob about how writing helps me process stuff and we talked about how for me it is a way to work through experiences. I don’t really realise I’m doing it at the time (I don’t sit down and think ‘today I’m going to write something representing that break up I had when I was 17’) but there is definitely a cathartic aspect to writing.
In The Winter Passing familial relationships and love are central to the story; it is at its essence a family saga. It begins to explore the switch between the parent / child as care provider as child grows and parent ages, as well as looking at what we inherit against what we make of ourselves.

I wanted particularly to show female relationships in a way I could recognise and relate to – they both recognise the effect of the patriarchy on female relationships and challenges it too, and I hope I’ve avoided one-dimensional characters (the Spice Girl effect) to show people who have many different facets and different roles across their lives.

And following on from this is the idea of sonder – a concept described by John Koenig in the Dictionary of Obscure Sorrows as, “the realization that each random passerby is living a life as vivid and complex as your own—populated with their own ambitions, friends, routines, worries and inherited craziness—an epic story that continues invisibly around you like an anthill sprawling deep underground, with elaborate passageways to thousands of other lives that you’ll never know existed, in which you might appear only once, as an extra sipping coffee in the background, as a blur of traffic passing on the highway, as a lighted window at dusk.”

I really only started to touch on this in The Winter Passing but it’s something I want to explore more in coming novels and short stories so I leave it here as something to think about – you can really blow your mind if you think about it deeply enough.

The Winter Passing is out now as an eBook and a paperback edition will be available soon, both available via Reckless Yes Publishing. You can buy the eBook here and if you enjoy the story please help this independent author out by leaving a review on Goodreads or Amazon.

Circularity Festival will return but their next event is the Circularity Cafe on 11 July at the National Brewery Centre – this is an informal event with no set agenda but will encourage networking and connected conversation to see what music and ideas can grow from it. Join Circularity on Facebook, find out more on the website, and follow on Twitter here. Check out the podcast on Spotify, iTunes etc etc etc.

Join the House of Morrigan: